Here’s a short list of six new(ish) books in Anglo-American legal history, broadly defined, that might be of interest to some readers of this blog. I’ve added, as well, two forthcoming titles that I’m looking forward to adding to my summer reading list once they appear. 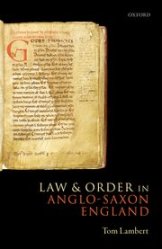 Law and Order in Anglo-Saxon England explores English legal culture and practice across the Anglo-Saxon period, beginning with the essentially pre-Christian laws enshrined in writing by King AEthelberht of Kent in c. 600 and working forward to the Norman Conquest of 1066. It attempts to escape the traditional retrospective assumptions of legal history, focused on the late twelfth-century Common Law, and to establish a new interpretative framework for the subject, more sensitive to contemporary cultural assumptions and practical realities.

The focus of the volume is on the maintenance of order: what constituted good order; what forms of wrongdoing were threatening to it; what roles kings, lords, communities, and individuals were expected to play in maintaining it; and how that worked in practice. Its core argument is that the Anglo-Saxons had a coherent, stable, and enduring legal order that lacks modern analogies: it was neither state-like nor stateless, and needs to be understood on its own terms rather than as a variant or hybrid of these models. Tom Lambert elucidates a distinctively early medieval understanding of the tension between the interests of individuals and communities, and a vision of how that tension ought to be managed that, strikingly, treats strongly libertarian and communitarian features as complementary. Potentially violent, honour-focused feuding was an integral aspect of legitimate legal practice throughout the period, but so too was fearsome punishment for forms of wrongdoing judged socially threatening. Law and Order in Anglo-Saxon England charts the development of kings’ involvement in law, in terms both of their authority to legislate and their ability to influence local practice, presenting a picture of increasingly ambitious and effective royal legal innovation that relied more on the cooperation of local communal assemblies than kings’ sparse and patchy network of administrative officials.’ 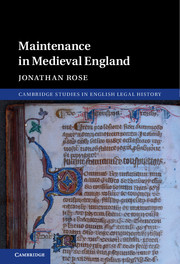 ‘This is the first book covering those who abused and misused the legal system in medieval England and the initial attempts of the Anglo-American legal system to deal with these forms of legal corruption. Maintenance, in the sense of intermeddling in another person’s litigation, was a source of repeated complaint in medieval England. This book reveals for the first time what actually transpired in the resultant litigation. Extensive study of the primary sources shows that the statutes prohibiting maintenance did not achieve their objectives because legal proceedings were rarely brought against those targeted by the statutes: the great and the powerful. Illegal maintenance was less extensive than frequently asserted because medieval judges recognized a number of valid justifications for intermeddling in litigation. Further, the book casts doubt on the effectiveness of the statutory regulation of livery. This is a treasure trove for legal historians, literature scholars, lawyers, and academic libraries.’ 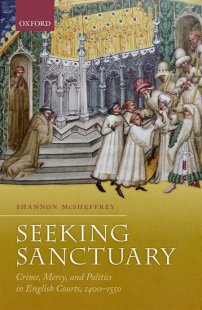 ‘Seeking Sanctuary explores a curious aspect of premodern English law: the right of felons to shelter in a church or ecclesiastical precinct, remaining safe from arrest and trial in the king’s courts. This is the first volume in more than a century to examine sanctuary in England in the fifteenth and sixteenth centuries. Looking anew at this subject challenges the prevailing assumptions in the scholarship that this ‘medieval’ practice had become outmoded and little-used by the fifteenth and sixteenth centuries. Although for decades after 1400 sanctuary-seeking was indeed fairly rare, the evidence in the legal records shows the numbers of felons seeing refuge in churches began to climb again in the late fifteenth century and reached its peak in the period between 1525 and 1535. Sanctuary was not so much a medieval practice accidentally surviving into the early modern era, as it was an organism that had continued to evolve and adapt to new environments and indeed flourished in its adapted state. Sanctuary suited the early Tudor regime: it intersected with rapidly developing ideas about jurisdiction and provided a means of mitigating the harsh capital penalties of the English law of felony that was useful not only to felons but also to the crown and the political elite. Sanctuary’s resurgence after 1480 means we need to rethink how sanctuary worked, and to reconsider more broadly the intersections of culture, law, politics, and religion in the years between 1400 and 1550.’ 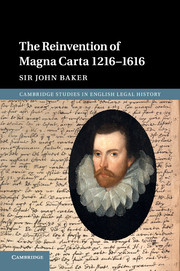 ‘This new account of the influence of Magna Carta on the development of English public law is based largely on unpublished manuscripts. The story was discontinuous. Between the fourteenth century and the sixteenth the charter was practically a spent force. Late-medieval law lectures gave no hint of its later importance, and even in the 1550s a commentary on Magna Carta by William Fleetwood was still cast in the late-medieval mould. Constitutional issues rarely surfaced in the courts. But a new impetus was given to chapter 29 in 1581 by the ‘Puritan’ barrister Robert Snagge, and by the speeches and tracts of his colleagues, and by 1587 it was being exploited by lawyers in a variety of contexts. Edward Coke seized on the new learning at once. He made extensive claims for chapter 29 while at the bar, linking it with habeas corpus, and then as a judge (1606–16) he deployed it with effect in challenging encroachments on the common law. The book ends in 1616 with the lectures of Francis Ashley, summarising the new learning, and (a few weeks later) Coke’s dismissal for defending too vigorously the liberty of the subject under the common law.’ 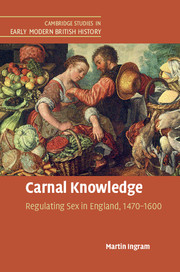 ‘How was the law used to control sex in Tudor England? What were the differences between secular and religious practice? This major study reveals that – contrary to what historians have often supposed – in pre-Reformation England both ecclesiastical and secular (especially urban) courts were already highly active in regulating sex. They not only enforced clerical celibacy and sought to combat prostitution but also restrained the pre- and extramarital sexual activities of laypeople more generally. Initially destabilising, the religious and institutional changes of 1530–60 eventually led to important new developments that tightened the regime further. There were striking innovations in the use of shaming punishments in provincial towns and experiments in the practice of public penance in the church courts, while Bridewell transformed the situation in London. Allowing the clergy to marry was a milestone of a different sort. Together these changes contributed to a marked shift in the moral climate by 1600.’ 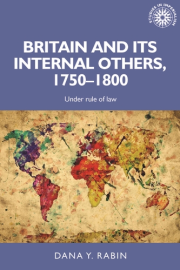 ‘The rule of law, an ideology of equality and universality that justified Britain’s eighteenth-century imperial claims, was the product not of abstract principles but imperial contact. As the Empire expanded, encompassing greater religious, ethnic and racial diversity, the law paradoxically contained and maintained these very differences.

This book revisits six notorious incidents that occasioned vigorous debate in London’s courtrooms, streets and presses: the Jewish Naturalization Act and the Elizabeth Canning case (1753-54); the Somerset Case (1771-72); the Gordon Riots (1780); the mutinies of 1797; and Union with Ireland (1800). Each of these cases adjudicated the presence of outsiders in London – from Jews and Gypsies to Africans and Catholics. The demands of these internal others to equality before the law drew them into the legal system, challenging longstanding notions of English identity and exposing contradictions in the rule of law.’ 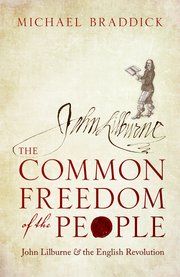 ‘The second son of a modest gentry family, John Lilburne was accused of treason four times, and put on trial for his life under both Charles I and Oliver Cromwell. He fought bravely in the Civil War, seeing action at a number of key battles and rising to the rank of Lieutenant Colonel, was shot through the arm, and nearly lost an eye in a pike accident. In the course of all this, he fought important legal battles for the rights to remain silent, to open trial, and to trial by his peers. He was twice acquitted by juries in very public trials, but nonetheless spent the bulk of his adult life in prison or exile. He is best known, however, as the most prominent of the Levellers, who campaigned for a government based on popular sovereignty two centuries before the advent of mass representative democracies in Europe.

Michael Braddick explores the extraordinary and dramatic life of ‘Freeborn John’: how his experience of political activism sharpened and clarified his ideas, leading him to articulate bracingly radical views; and the changes in English society that made such a career possible. Without land, established profession, or public office, successive governments found him sufficiently alarming to be worth imprisoning, sending into exile, and putting on trial for his life. Above all, through his story, we can explore the life not just of John Lilburne, but of revolutionary England itself — and of ideas fundamental to the radical, democratic, libertarian, and constitutional traditions, both in Britain and the USA.’ 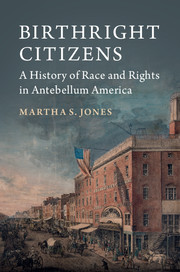 ‘Before the Civil War, colonization schemes and black laws threatened to deport former slaves born in the United States. Birthright Citizens recovers the story of how African American activists remade national belonging through battles in legislatures, conventions, and courthouses. They faced formidable opposition, most notoriously from the US Supreme Court decision in Dred Scott. Still, Martha S. Jones explains, no single case defined their status. Former slaves studied law, secured allies, and conducted themselves like citizens, establishing their status through local, everyday claims. All along they argued that birth guaranteed their rights. With fresh archival sources and an ambitious reframing of constitutional law-making before the Civil War, Jones shows how the Fourteenth Amendment constitutionalized the birthright principle, and black Americans’ aspirations were realized. Birthright Citizens tells how African American activists radically transformed the terms of citizenship for all Americans.’