What’s Love Got to Do with It? Marriage in Late Medieval England and the Low Countries

“More things are necessary for a household than four naked thighs.”[1] In the middle ages the household was headed by a husband and his wife and was the centre of family life and economic productivity. So, in 1486 when John Wellis of London used the above retort upon hearing that his alleged betrothed Alice Billingham had publicly declared that they were married, he was chastising Alice for suggesting that they could legitimise their romantic relationship without the necessary social status and financial stability. Alice, however, had witnesses to the fact that John had asked her to be his wife on the feast of Saint Valentine that same year, asking for her hand so that she could be his “Valentyne for ever.”[2] Like today, the medieval feast day of the Roman martyr St Valentine was a celebration of all things “romance.” These two contrasting stories, however, give us a snapshot into the tension between the expectation of love and the making of a good and economically fortuitous marriage in the middle ages.

The later middle ages saw the development of the concept of bourgeois domesticity and, as wealthy towns-folk owned increasingly more goods, it became the wife’s role to manage these materially rich households.[3] As the head of the household, the man was expected to not only love and honour his wife, but also to govern her. A wife, in return, was expected to show her love by obeying her husband. The narrative of this gendered division of the household was steeped in the language of love and mutual respect. The fifteenth-century English moralist Peter Idley wrote: “thy wife thou love in perfect wise, in thought and deed, as heartily as thou can. This shall make her a good woman.”[4] The ideal love between a husband and wife in the middle ages was therefore conceived as something in which both partners showed respect which in turn facilitated moral development. Marital love was – in many ways – a bourgeois construct in the later middle ages.

Marriage according to the medieval church was a sacrament and it was understood as inherently virtuous. At the heart of this idea was the belief, derived from Saint Augustine, that love between a married couple was a sign of God’s love and grace.[5] The English Benedictine monk Matthew Paris’ formula for proper marriage was: “law connects them, love and sexual compatibility.”[6] Sexual pleasure within marriage was also encouraged by many religious scholars of the time, particularly the thirteenth-century scholastic theologian Peter Abelard (most famous for his illicit sexual relationship with his pupil Heloise). David d’Avray has even suggested that as medieval marriage was perceived as symbolic of Christ’s union with the church, marital sex was the ultimate symbol of human union with the divine.[7] The church communicated its ideas of marital sanctity through sermons but the extent to which these ideas were adopted by the laity is still a matter of debate amongst historians.

It is difficult to disentangle the influence of the church on attitudes to marriage in the middle ages, especially as much of our evidence about how people married comes from church court records. From the twelfth century onwards church law (canon law) determined that all that was required for a legal marriage was the exchange of words of consent in the present tense (Yes, I do!). Although there were other requirements, such as the publication of banns and the presence of a priest, their absence did not invalidate a marriage. The centrality of consent is striking and has led to intense discussions about the degree of free choice in medieval marriage. What did the exchange of consent mean for medieval couples in a society characterised by strategic marriage, and what role – if any – did love play in the giving of consent? 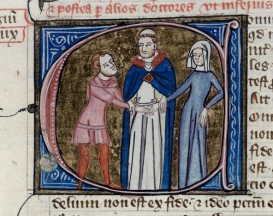 In both England and the Low Countries, litigants and their attorneys tried to enforce disputed marriages. One method used to convince a judge that words of marital consent had actually been exchanged was to portray the act as an individual and deeply personal ritual between two people who were in love. This was the strategy followed by Goeswijn Swevers and his attorney in his plea against his alleged wife Heylwige Coemans in the church court of Liège. Goeswijn had married Heylwige, the plea argues, but suddenly Heylwige refused to acknowledge the marriage. Yet, Heylwige had replied positively when he had stated that he loved her. She had even replied that she loved him too and would rather marry him than someone far richer.[8]

In a similar case, Wenceslaus Wincelien asked the Liège church court to acknowledge his betrothal to Maria de Faushamp (1434). According to his plea, Wenceslaus had spent several hours in a garden with Maria talking about how much they loved each other. The couple then exchanged promises of marriage whilst holding each other’s right hand. Maria allegedly said: “Wenceslaus, I promise upon my faith to take you as my husband and I will never have another husband than you,” to which Wenceslaus replied: “And I also promise upon my faith that I will take you as my wife and I will not have any other wife than you.”[9] The inclusion of the garden as the place where consent was exchanged is meaningful, as gardens symbolised love, beauty and pureness in medieval culture.[10] Both Goeswijn and Wenceslaus thus framed the exchange of marital consent as a personal — even a romantic — matter between two individuals, thereby hoping to prove the sincerity of their betrothed’s promises of marriage.

In 1330, Jan van Boendale, a legal secretary from Antwerp, wrote that “husband and wife will love each other with all their senses, [and] with a pure and sincere heart.”[11] Fast forward nearly 200 years, cross the English channel into London, and we see the invocation of the heart used to emphasise sincerity of marital consent. The people who appeared before the medieval church  court held at St Paul’s Cathedral often recalled that the exchange of consent was presupposed by the request to “find it in your heart to have or to love me.” In Henry Forrest’s marital suit against Thomasina Baker in 1521, for example, one of his witnesses, Margery Wharley, told the court that she had heard Henry asking Thomasina “how say yowe, may you fynde in your hert all other to forsake and take me to your husband?” and Thomasina replied, “yea I am content.” [12]  A year later, Robert Wyer asked Jane Cresset whether her words of consent were spoken from the heart, to which she replied, “yea yn good faythe.”[13]

These references to the heart are important, but did not equate to a simple expression of love. In medieval society the heart and the mind were thought to be symbiotically connected. Moreover, medical and philosophical principles placed the heart at the centre of the body from which all other bodily functions were directed. The late medieval English poet John Gower placed the body’s governance of reason within the heart and declared that “the herte [is] principal.”[14] A proverb from the mid-fifteenth century (collected by Walter Pollard of Plymouth) echoes this idea: “that which the heart thinks, the mouth speaks.”[15] In marriage dispute records, the invocation of the heart was thus used as a metaphor communicating truth, sincerity, and earnest commitment to matrimony. 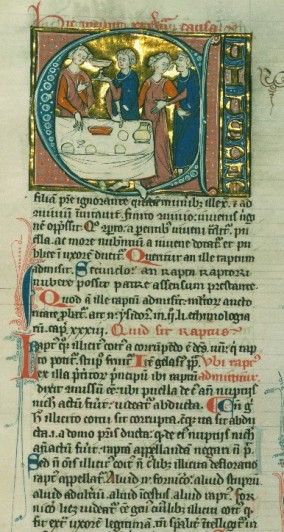 It is tempting to interpret this language as evidence for affection. But it is worth remembering that litigants framed marital consent as an expression of love to emphasize their commitment to a marriage and persuade the court of its legitimacy. That love was not a requirement to contract marriage in the Middle Ages appears clearly from the following case in the records of the church court of Brussels. No testimonies have been preserved but we do have the judge’s short and formulaic final sentences. On 7 July 1458, he enforced the clandestine marriage of Michaël Betten and Katherina Bincken, sentencing them to celebrate it properly. The record includes how Michaël had abducted Katherina and explains that whereas Katherina had been taken violently against her will, she nevertheless married him afterwards “with her spontaneous consent and her free will.”[16] This contradiction between the violent abduction and the spontaneous marriage to which the victim supposedly consented freely is striking and contrasts sharply with the idea of marriage as a deeply personal tie between two people in love.

Over the last twenty years, historians have increasingly problematised “consent” in the past, warning modern commentators not to project modern understandings of consent onto that of medieval canon law.[17] It is no coincidence that this historiographical evolution is mirrored in theoretical discussions on consent in present-day society, especially in a sexual context. Whereas until the 1990s, consent was especially defined as a lack of demonstrable resistance, consent is today defined by what is present instead of what is absent (“yes means yes” instead of “no means no”).[18]

For the middle ages, Sara Butler has argued that the gap between coercion and consent was sometimes thin in late medieval England; women did not have many legal options to deal with “very persuasive” or even violent men and consequently often “agreed” to marry them.[19] Research on abductions and rape has shown that many victims married their abductors for reasons other than love. For example, Maria Cesco has shown that violent abductions regularly ended in marriage because of the damage the rape caused to the victim’s reputation.[20] To delineate between consent and coercion, canon law stated that the degree of pressure applied to an individual could not “sway a constant man or woman.”  In practice, this meant that either family members or a romantic partner could exert some pressure on an individual to express consent; however, the degree to which this was acceptable under the law and within a community was open to interpretation.

The Ambiguity of Consent

When it comes to the moment of marriage-making, consent to wed out of personal choice and love was a well-known theme that was frequently referred to in both cultural and legal narratives. Church court records show the effort to which people went to convey the sincerity of consent to marriage, or rather to make personal decisions and emotions visible, not only to future spouses but also to friends, family, and participants in the legal system. Marital consent did not equal love, but there was nevertheless an expectation of the marital bond to develop and deepen during a marriage. While the medieval ideal of a husband and wife bound by love, moral development, and economic fortitude may have corresponded to the marital experience of some, it was certainly not the case for everyone and church court records provide us with the diversity of the late medieval marital experience.

Anna Boeles Rowland and Chanelle Delameillieure are based in the History Department at KU Leuven.

A historiated initial “C,” depicting a ravished woman who married her assailant. Miniature in a version of Gratian’s Decretum, created in Hainaut around 1280-1290. The Walters Art Museum,  Baltimore, Ms. W. 133, fol. 310r.