In our previous work on the Leeds–based forensic expert Dr Thomas Scattergood, we noted that he performed toxicological analyses on more animal than human victims, including horses, cattle, dogs, foxhounds, chickens, pigs, pheasants, partridges and even a rat. Indeed, the first case recorded in the three manuscript notebooks that he compiled between 1856 and 1897 concerned a dog that had been poisoned in Hertfordshire.[1] The frequency with which Scattergood was consulted by farmers, landowners and the police in such cases suggests that animal poisoning was a serious problem in Victorian England, but we still do not know precisely why Scattergood was asked to undertake this kind of forensic work. However, we believe it was to facilitate prosecutions or insurance claims. We consider these possibilities below, focusing (as Scattergood did) on animal poisoning.

Prosecutions for Crimes Against Animals

Crimes against animals tend to be considered as facets of rural conflict. Timothy Shakesheff has shown that incendiarism and animal-maiming were by far the most serious rural crimes against property, a fact reflected in the sentences meted out by the courts: death, under the Waltham Black Act of 1723 or, after its repeal in 1823, a lengthy spell in gaol or even transportation.[2] However, the work of John Archer demonstrated that animal-maiming was less common than arson and more closely associated with East Anglia than any other part of England.[3] Both Shakesheff and Archer agree that animal-maiming was a rare crime that was probably carried out mainly to satisfy a desire for revenge: the object of attacks on animals was not the animal itself but its owner. Few of the perpetrators were ever caught.

Ironically perhaps, the most famous of all animal poisoners was caught, tried and executed, but his crime had nothing to do with personal vengeance. Daniel Dawson (1745–1812) was a professional touter well known to the betting fraternity in Newmarket, Suffolk, the birthplace of thoroughbred horse racing. In April 1811 he dosed several horses with arsenic in order to make them too unwell to win, but four horses died and he was charged under the Black Act, which made the unlawful and malicious killing, maiming or wounding of “any cattle” a capital offence.[4] Acquitted on a technicality in March 1812, he was immediately detained on a charge of poisoning racehorses in 1809.[5] This prosecution succeeded and he was hanged at Cambridge on 8 August 1812. His trial revealed the prevalence of such practices:

The physicing and poisoning system, which has been more or less practised by frequenters of the turf, amongst other crosses and jostlings, from the time of the defeat of the Prince of Wales’s Eclipse, when opium was administered, down to 1811, is at length suppressed for awhile, if not completely abolished, by the execution of Dawson. The fate of this unfortunate man excited much sympathy, as his time to die drew near. That such sorts of acts for which Dawson suffered, have been very frequent at Newmarket and other places of turf amusement, cannot be denied, when it has been known that balls have been administered to horses by the owners, to prevent them winning.[6]

The cases that attracted the most media attention tended to involve horses (because they were so valuable) or extreme cruelty; any whiff of personal animosity between members of the middling sort added an extra frisson of horror. In 1867 a local doctor was arrested for poisoning two of his neighbour’s horses with strychnine. The government undertook the prosecution and sent an experienced London detective to Ely to investigate, a post-mortem examination of both animals was made by a veterinary surgeon, and their organs were subject to chemical analysis by the professor of chemistry at the Royal Veterinary College, in what seems to have been precisely the same manner adopted for human victims. The perpetrator was eventually sentenced to 5 years’ penal servitude.[7] Racehorses remained potential targets well into the twentieth century: in May 1950 a reward of £100 was offered for information leading to the conviction of the individuals responsible for poisoning 12 thoroughbreds in training at East Ilsley, Berkshire.[8] 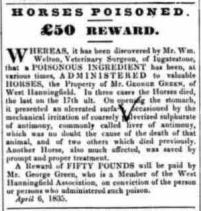 Canine victims could arouse just as much indignation as equine ones did. One of the earliest records that we have found of a successful prosecution for animal cruelty was a civil suit heard at the Lewes assizes in August 1806. The defendant was accused of having rubbed oil of vitriol over a neighbour’s guard dog, causing such injury that the animal had to be shot. For the plaintiff, renowned barrister William Garrow told the jury that this was a case of “most unparalleled cruelty, as well as an aggravated breach of the law,” and that they would be justified in giving “the highest value that ever was set upon any animal of the sort”. The defendant’s barrister could say nothing in his client’s favour but warned the jury against “giving way to their angry feelings, and awarding vindictive damages.”[9] The plaintiff was awarded £5 for the loss of his dog.

Given the monetary value of farm animals to their owners, it should be no surprise to learn that the nascent insurance industry offered policies that covered accidental death. Scattergood kept an undated newspaper clipping which shows that farmers insured livestock against lightning strikes:

Animals Killed by Lightning – ‘J.B.J.’ writes to us: Having seen the discussion in your paper on this subject, it occurred to me that my experience in an insurance office might prove useful. In every instance where notice is sent of death of sheep or cattle by lightning the owner states that it will be a total loss, as the carcases become one mass of corruption within a few hours of death…”[10]

It would appear likely therefore, that insurance against other causes of injury or death might also have been quite common for animals that had a commercial value. Many of Scattergood’s animal cases involved arsenic and strychnine deaths caused by criminal intent or negligence, and the types of animals he was asked to analyse suggest a financial rather than emotional link between insurer and insured. Between 1850 and 1870 The Pharmaceutical Journal reported several civil suits following large-scale deaths among sheep killed by arsenical dips intended to rid them of external parasites, for example at Exeter in 1851 (renowned toxicologist William Herapath testified for the plaintiff, who won his case) and Burton in Northumberland in 1858 when the plaintiff was awarded damages of £1400 for his 850 poisoned sheep.[11] It would be interesting to know what sorts of insurance policies became available for this type of accidental death, and when pet owners began to insure domestic animals, although research carried out by the pet insurance industry suggests that the first domestic policy in Britain was not issued until 1947.[12]

This is clearly an area of criminal justice history that is ripe for exploration: not only are civil trials relatively neglected in the history of forensic medicine and science, but animal victims – whether of rural discontent or personal animosity – merit renewed attention. The large-scale digitisation of Victorian newspapers offers a new avenue of research, and we suspect that Scattergood’s forensic practice on animal victims may well have been repeated among other Victorian toxicologists and chemists.

Laura Sellers is a historian of medicine, psychiatry and crime in the nineteenth century. She is currently the project curator for the Thackray Medical Museum’s capital redevelopment project.

All newspaper clippings retrieved from the British Newspaper Archive and reproduced by permission, © The British Library Board. All rights reserved.

[4] 9 Geo I c.22, An Act for the more effectual punishing wicked and evil-disposed Persons going armed in Disguise and doing Injuries and Violences to the Persons and Properties of His Majesty’s Subjects, and for the more speedy bringing the Offenders to Justice; commenced 1 June 1723, repealed 8 July 1823.

[12] A Short History of Pet Insurance Around the World, https://www.petfirst.com/pet-fun/a-short-history-of-pet-insurance-around-the-world/ (2016).