Anyone who publishes in the area of legal history is probably already well aware of the fact that there are few series out there dedicated to the history of crime. Amsterdam University Press is launching a new series on “Premodern Crime & Punishment,” with Guy Geltner as editor-in-chief, author of The Medieval Prison: A Social History (Princeton University Press, 2008) and Flogging Others: Corporal Punishment and Cultural Identity from Antiquity to Present (Amsterdam University Press, 2015). In case you are interested, here is some information about the series. 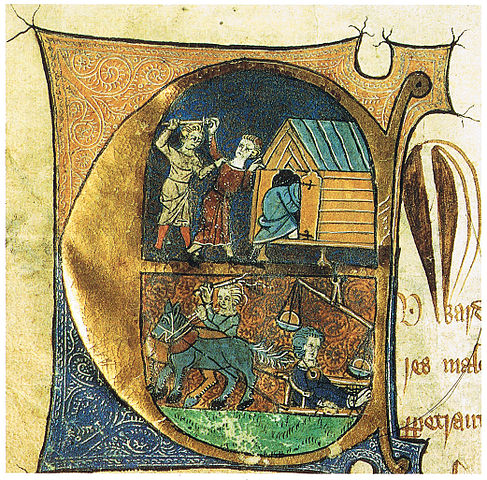 Image: An illustration of the punishment dealt to bakers that had violated weight regulation on bread. The offender would be dragged through the city streets on a sled with the fraudulent bread tied around his neck. City of
Bristol Record Office.

Studying premodern societies’ efforts to define and cope with deviance continues to generate insights about the usefulness of the pre/modern divide. Such study historicizes what appear, from a modern perspective, to be perennial problems and staple characteristics of crime and punishment. To accommodate the influx of quality research in this field, this series provides a congenial venue for works exploring the social, legal, institutional, religious, and cultural aspects of premodern crime and punishment.

The series invites scholars at any stage of their careers and with a geographical focus on any sub-region within Europe and the Mediterranean World to share their book proposals and draft manuscripts with us.

The series is interested in both monographic studies and proposals for developing edited volumes dealing with specific crimes (such as murder) and punishments (such as the death penalty) from a comparative and trans-regional perspective, as well as thematic volumes exploring the relations of gender and crime, religion and punishment, and the spatial and performative dimensions of justice in premodernity.

Premodern Crime & Punishment is published by Amsterdam University Press, which is distributed in North America by the University of Chicago Press. Series information can be found at http://en.aup.nl/series/premodern-crime-and-punishment, or contact Commissioning Editor Erika Gaffney at Erika.gaffney@arc-humanities.org.