‘Justice’ comes in many forms. Women mired in violent marriages in early modern England had little hope of formal, legal escape but might try for justice of a rougher sort. A woman might seek a separation authorized by the church courts if her very life was in danger, or at least ask a justice of the peace to take bonds for her husband’s good behaviour, but that was about all the law offered, and even that only sparingly. That’s not to say that women in abusive relationships had no other options, though. Early modern wives, and their friends, sometimes tried rather less licit ways to improve their situations. This post tells the story of one woman whose complaints about her drunken brute of a spouse prompted a sympathetic vicar to sneak into her husband’s house at night, whip in hand and wearing women’s clothes, with the aim to beat him into better behaviour – but it’s also a story of legal officials then deciding that the wife and her helpers had been even more actionably ‘uncivil’ than her husband. The story reminds us that then (as now) expectations of marriage shaped perceptions of the violence parties within those relationships inflicted upon each other and quite what counted as a just response.

Anne Ryman and her husband Devenish were a couple of some means, with several properties scattered about Sussex and Hampshire but with their residence established at Chichester, in the cathedral close. His father was a local worthy who had previously served as Chichester’s mayor. Devenish indulged his wife’s tastes for pretty things – or liked displaying his wealth – by buying her gifts such as a pearl necklace and a gold ring that neighbours remarked upon. He relied upon her in his business affairs, and together they had four or five children. But he also spent much of his time at the alehouse. Some neighbours tried to draw a fine distinction by describing him as being frequently ‘distempered with drink’ rather than drunk. (One witness noted that Devenish was often so ‘distempered with drink that he could not come or do or ride’, but whether Devenish was drunk, he could not say.) According to another neighbour, though, Devenish had once fallen out of an alehouse door face forward, then passed out in the open street with his heels higher than his head. After another session at the alehouse, Devenish had to be restrained as he slashed and swung his sword at carts passing on the road. And on other occasions, he beat Anne. Neighbours recalled the night that Devenish roared drunkenly about his home, sword drawn, with a maid and children crying, and Anne locked away in a bedroom for fear. Another time he punched her so hard that she needed surgery. He pulled her hair, tore her clothes, and threw pots at her head.

But Anne’s life was not a simple misery. She frequently went out riding with Dr Thorne, the Dean of Chichester, and his wife and other friends. She routinely attended soirees hosted by the Thornes, dining, dicing, and playing cards with a group of neighbours. One of these evenings, in 1611, someone raised the subject of Anne’s abusive husband. She said that she had heard that his father had ‘had that quality, and being once whipped for it, was the better ever after’. If she thought it would do her husband any good, she said, she would willingly bestow 40 shillings on someone to give Devenish a good whipping, too. Dr Thorne piously observed that if Devenish did not amend his course of life and live more peaceably with Anne, he would have him whipped out of the cathedral close where he lived. But Stephen Golding, vicar of Amport, offered to go one better and promised a more immediate ‘medicine for his malady’.

Golding went in disguise, but not just any disguise. He visited Katherine Hoskine, the wife of the miller of Bosham, and asked to borrow some of her clothes. When she asked why, he responded that he was disposed to go to Chidham to be merry. Whatever she thought of this answer, she handed over a red petticoat and white waist coat, and off Golding went, picking up a willow switch on his way. When Golding returned the clothing the next day, he volunteered ruefully that while he had tried to whip Devenish in his bed in hopes of having him leave off beating Anne, Devenish had fought back, biting him by the finger and taking away his rod before he could land a proper blow.

In the days that followed, Devenish complained to many people of his unwelcome midnight visitor. Some neighbours suspected he had concocted the story just to cast aspersions on his wife. Golding’s disguise seems to have worked, as Devenish kept blaming another man for the intrusion. Anne, meanwhile, had moved out of the home. Devenish wrote to demand her return, even while calling her a whore and telling her ‘somewhat roundly’ of her many faults; she returned the letter with a note in the margin urging him to get a better scribe for his next missive, as whoever wrote this one was a fool. But then, Devenish became ill with a fever and died. Anne refused to have anything to do with his burial, and soon married one of the other frequenters of the Dean’s card nights, Thomas Bickley.

Local authorities investigated Devenish Ryman’s death—even holding an autopsy—but found no evidence that he’d died of anything other than his fever. When they opened his body they found the blood discoloured and lungs and liver enflamed, but nothing untoward that suggested violence. No one faced any charges of criminal involvement in his death. But in the course of the investigation, it seems that Golding did come forward to confess to his attempted whipping. Devenish’s father then decided to seek justice of his own. 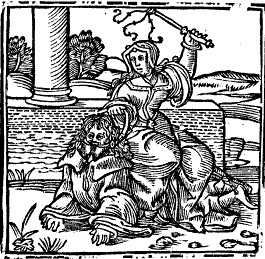 We know of this story because it eventually came before Star Chamber, a court ideally suited to hear matters that were not quite criminal by the laws of the day. Judges expressed regret that Devenish had beaten his wife—indeed, they huffed, they very ‘much misliked…such uncivil behaviour’. But while his deeds warranted a tut or two, Anne’s required a stronger response. The judges opined that ‘It was a great misdemeanour in the wife, and uncivil and undutiful carriage in her to do so to her husband, as they used to do to children or fools, to wit, to give them the whip, and so to disgrace and take away the good name of her husband’. Judges in Star Chamber freely debated amongst themselves the sentences they thought fit for the particular offences and offenders before them. They decided that both Anne and Stephen Golding should pay massive fines of £500 a piece, later moderated to the still-substantial amount of £250 each. In some other cases, the judges hesitated to fine married women as the fact of their marriage effectively passed their property to their partners, meaning that their husbands would be forced to pay (and so in at least one case they ordered the woman whipped in lieu); in this matter, though, they thought that Anne’s new husband might well be made liable, given suspicions that he and Anne had already been too familiar before the death of Devenish.[1]

This story touches on several points of interest. Golding’s choice of dress for his would-be whipping catches the eye, recalling the transgressive moments of inversion at riots or festivities in which men dressed as women or, vice versa, women as men.[2] The language of civility and the contested use of the whip to correct ‘uncivil’ behaviour stands out, too, as does the particular shamefulness of whipping for an adult man of some status. The episode and the Star Chamber judges’ responses also suggest the limitations of the supposed restraints upon domestic violence offered by neighbourly expressions of disapproval.[3] Given that Star Chamber was itself becoming notorious for its imposition of punishments not specified at law, we might end by noting the parallels between the vicar’s attempted whipping of an abusive husband and the Star Chamber judgement against an undutiful wife as two forms of ‘rough justice’, both somewhat ad hoc efforts to civilize behaviours deemed ‘uncivil’ within an early modern marriage.

Images: Detail from Pieter Brueghel’s The Wedding Dance (1566), via Wikimedia Commons, and from the title page of Anon., The Deceit of Women (London, 1557).

[1] The story is summarized from trial records at The National Archives, STAC 8/248/4 and the report of the case’s judgement, taken here from Reports and Cases Collected by the Learned Sir John Popham (London, 1656), 129; see the brief notes, too, in British Library, Harley MS 1200, f. 91v and Harvard Law School Library, MS 1101, f. 52v. Ultimately, both Thomas Bickley and Stephen Golding paid fines of £250; see TNA, E 159/453, m. 144, on view at the Anglo-American Legal Tradition website. Supplementary details are taken from F.H. Arnold, ‘Parochial History of Appeldram’, Sussex Archaeological Collections (Lewes, 1866), vol. 18, p. 81 and from the Clergy of the Church of England database [http://theclergydatabase.org.uk/].

[3] For a discussion of the limits on such violence, see, e.g., Jennine Hurl-Eamon, ‘”I Will Forgive You if the World Will’: Wife Murder and Limits on Patriarchal Violence in London, 1690-1750,” in Violence, Politics and Gender in Early Modern England, ed. Joseph P. Ward (Basingstoke, 2008), 223-47. On domestic violence in medieval and early modern England more generally, see also Margaret Hunt, ‘Wife Beating, Domesticity and Women’s Independence in Eighteenth-Century London’, Gender & History 4.1 (1992), 10-32; Susan Dwyer Amussen, ‘”Being Stirred to Much Unquietness”: Violence and Domestic Violence in Early Modern England’, Journal of Women’s History 6.2 (1994), 70-88; Sara M. Butler, The Language of Abuse: Marital Violence in Later Medieval England (Leiden: Brill, 2007).